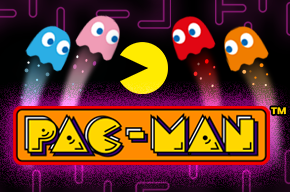 Try to chomp your way to a win in PAC-MAN™, our retro-cool instant game! Try to reveal three matching symbols on a ticket to win a prize! If you find three PAC-MAN™ Bonus Symbols, you’ll enter the Bonus Game to eat up the fun!

Each PAC-MAN™ game features up to nine tickets. Players may purchase sets of three, six or nine tickets per game. Each ticket features nine symbols.

Reveal three matching symbols on a ticket to win the prize for that symbol as shown in the Prize Table. For each winning ticket, nine new symbols and a 5X banner will replace the existing symbols on the ticket. Any prizes won with the new symbols will be multiplied by five as indicated by the 5X banner.

After a win on a ticket with a 5X banner, nine new symbols and a 10X banner will replace the existing symbols. Any prizes won with the new symbols will be multiplied by 10 as indicated by the 10X banner.

Reveal three PAC-MAN™ Bonus Symbols among all purchased tickets to play the Bonus Game for a guaranteed prize. In the Bonus Game, the player is presented with three rounds and a path with 20 levels.

In each round, press the PLAY button to spin the wheel and reveal a number. PAC-MAN™ will move forward that number of levels. Landing on a level with a +1 Cherry Symbol will grant the player an extra round. When no rounds remain or when the end of the path is reached, the player will win the prize reached on the path.